The American in Canada: Part I

So, I’m just going to put it out there…Canada, you are the butt of American jokes. I’m sure everyone remembers the show How I Met Your Mother and the ample amount of hate the character Robin Scherbatsky got for being Canadian and the amount of hate Canada got in general. Including this moment, when Barney found out he was Canadian.

I must admit I never really thought that much about Canada. It came onto my radar only in high school when many of my friends were applying to universities in “We the North” country and several of my teachers were Canadian.

As an American, Canada was like that mysterious cousin you make fun of at family reunions who only comes out once and awhile for the free booze and potluck – then disappears until the next family event. You’re not sure what’s going on there.

Well, I’m here to tell my fellow Americans and to some extent – the world – that it’s time to stop ignoring your brethren up north and start embracing. Like a comedian once said, the US is to Canada as Mexico is to the US. All inappropriate political meaning implied.

1. They don’t even want Justin Bieber back. Sorry to the 273,968 people who signed the deportation petition.

2. If you’re an American, they will not let you forget they helped burn down the White House in 1812.

This little piece of history has definitely been fudged by American history books. I can’t tell you how many times I’ve been reminded that Canada helped the British burn down the White House in the War of 1812. Yes, its true. I didn’t know either. You can read about it here. 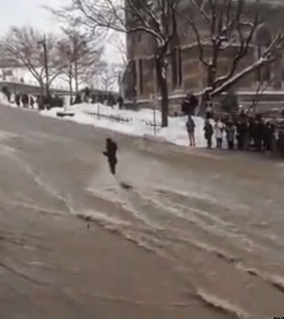 As well as my worst nightmare…yes, they’re ice skating down a street.

4. They can check emotions at the door when discussing politics.

5. Immigration…it’s okay America, they do it too and it works if you actually make policies. Find out more here.

6. They came out of the 2008 recession better than most countries.

And who was leading the G7 big-whigs’ effort to fix the global crisis? Tiff Macklem, a Canadian  who was at the time a high up official in the Finance Department. And why did they survive far better than the US? Again, that thing the US can’t seem to produce – policies (effective ones).

7. They have infiltrated the NHL – all the good players are Canadian, according to Canadians.

10. Not everyone loves Tim Hortons but it still remains a pride of Canada.

11. Their winters are tough, and yet they remain cheerful and upbeat.

13. Most stores charge for bags and the world hasn’t fallen apart. In fact, reusable bags are stronger, easier to carry and environmentally friendly. Get with it America.

I’m not sure why I thought this, but I kind of assumed people didn’t jaywalk in Canada – the whole they’re so nice stereotype. Surprisingly, it happens a lot and there are tons of bikers. Everywhere.

15. They’re population is about the size of California, which means there is a lot of empty space in Canada.

16. Canada goose jackets are Canadian gold. There was actually a heist recently.
Also, Canadian geese are a little insane. 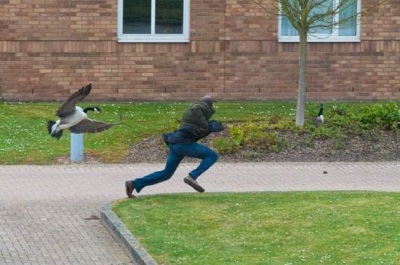 I attended a ‘Midterm Elections Party’ at UofT and I was surprised how much Canadians knew about American politics. The fact that other people care more than a majority of Americans breaks my heart a little. American politics affects a large portion of the world one way or another so it’s more important than you think, so be a responsible citizen and pay attention!

18. Drake does not, I repeat, DOES NOT just chill in downtown Toronto (or I’ve never seen him walking about). But he is the Toronto Raptors global ambassador so you might catch a glimpse at a game!

19. “We the North.” Pretty much the best country slogan ever. You pretty much stated you own the whole north. Bold.

20. They have ‘beaches.’ This actually (stupidly) never occurred to me because “Isn’t it cold all year?” Yeah having a beach and it being cold have nothing to do with each other, I know.

21. What happens in the Arctic is actually a big deal. Who has claim!? Read more here.

23. British Cadbury chocolate is much more prominent and there’s a thing called Mr. Big, yeah. Also the Kinder Egg ban was lifted in the US, so eat some eggs because Canadians have been enjoying them for years!!

Those are just a few things I’ve come to realize while being here as well as the fact that Canada is actually pretty awesome. It’s amazing how much two places can be alike but so different at the same time. I didn’t realize how hard it would be to adjust here because, hey it’s just like the States right? But there are a lot of unique things to Canada and I’m so glad they’ve accepted me…although I have to deal with the American jokes every now and then.

I’d like to thank a certain billionaire for that. This video sums it up pretty well.

One thought on “The American in Canada: Part I”